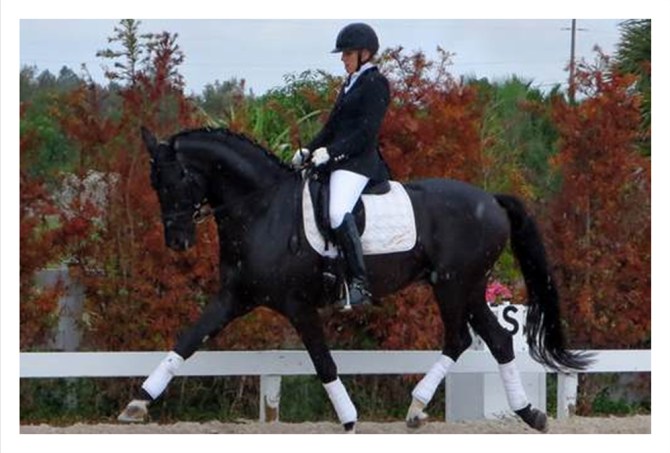 Today the journey towards becoming one of the best young dressage horses in the United States culminates for 18 German Oldenburg horses. The 2013 Markel/USEF Young Dressage Horse Championships are underway and with it, the dreams of many German Oldenburg breeders, owners and riders. In 2013, there is no other breed registry that has as many horses selected to compete in this prestigious final as the German Oldenburg Verband. We are immensely proud of our North American and German breeders for the achievement of this statistic.

In the FEI Four Year Old division it is no small feat that long time German Oldenburg breeder Judy Yancey of Yancey Farms in FL has brought forth two sibling talents from her program. The lovely 2009 North American bred German Oldenburg mare Floretienne  (Florestan I x Tamarande (Jazz – Matador II)) was a Premium Foal the year of her birth and will compete along side her half brother courtesy of embryo transfer. She is owned by Leslie Waterman and ridden by Debbie Hill.

The Four Year Old Division will prove to be a battle of Judy’s dam-line as also selected is the 2009 North American bred German Oldenburg gelding Quantum Jazz (Quarterback x Tamarande (Jazz – Matador II)) who was selected as a Premium Foal and Foal of Distinction the year of his birth and is also owned by Leslie Waterman and ridden by Debbie Hill. Their dam Tamarande scored a fantastic 8.2 overall at her German Oldenburg Mare Inspection and her dam, the German Oldenburg mare Acadia (Matador II x Aktionella (Rubinstein I – Welt As)) produced the impressive full sibling to Tamarande; the licensed KWPN stallion Wynton who has been successfully ridden to Grand Prix by Madeleine Vrees-Witte.

In the FEI Five Year Old division we once again have a Yancey Farms bred horse selected for the finals. The 2008 North American bred German Oldenburg licensed stallion Qredit Hilltop (Quarterback x Vb.Pr.St. Dream Rubina (Dream of Glory – Rubinstein I)) was selected as a Premium Foal the year of his birth. In 2012, Qredit Hilltop became the champion of the FN recognized 70-Day Stallion Performance Test in OK, besting 21 other stallions to win with an overall index of 126.59. Qredit Hilltop was also the Reserve Champion in the Markel/USEF Four Year Old Championship in 2012, placing just behind his stable mate, the German Oldenburg stallion Hemmingway. Qredit hails from Judy’s prolific Helena dam line that has produced four licensed stallions. He is owned by Hilltop Farm Inc and ridden by Christopher Hickey.

The 2008 German bred Oldenburg mare St.Pr.A. Fiderhit OLD (Fidertanz x St.Pr./El Fleur (Sandro Hit – Figaro)) was bred by Josef Gramann and was a Fohlenprämie the year of her birth. She completed an exceptional Mare Performance Test in Vechta in 2011 to obtain her mare title. In her MPT she scored 9’s for her trot and canter and an impressive 9.5 for rideability, which warranted her selection for the prestigious Oldenburg Elite Mare Show at Rastede where she competed in 2011. Also an Oldenburg Auction graduate she was selected as a foal for the Summer Mixed Sales in 2008. Her dam St.Pr./El, Fleur also was selected for Rastede in 2004 had has brought forth three German Oldenburg foals of quality that have been selected for the Oldenburg Foal Auctions. Fiderhit OLD carries the Verband’s letters behind her name through sponsorship from OLD Förderverein, a sponsorship society set up to assist and promote the success of German Oldenburg horses. Fiderhit OLD is owned by Michael Davis and ridden by Nadine Buberl.

The 2008 German bred Oldenburg gelding Fashion Designer OLD (Faustinus x Elite-St. Forst-Design (De Niro – Rubinstein I)) was bred by Heike Kind and selected as a Fohlenprämie the year of his birth. In 2012, Fashion Designer OLD won the title of Landeschampion of the Four Year Old Mares and Geldings at the Oldenburg State Championships at Rastede and was selected to compete at the Bundeschampionate where he scored an 8.5 in round one with impressive 9’s for his trot and conformation. His dam Elite-St. Forst-Design has also produced the Advanced dressage horse Jever Fun by Jazz Time. His grand dam Vb.Pr./El. Försterart produced the Advanced dressage horse Dandy by Donnerhall. He owned by Michael Davis and ridden by Nadine Buberl.

In the FEI 6 Year Old Division excitingly 5 out of 11 horses selected for the finals are German Oldenburg’s! The gorgeous 2007 German bred Oldenburg mare St.Pr.A. Elfenfeuer (Florencio I x St.Pr./El, Elfensonne (Sion – Figaro)) was bred by Ewald Grotelueschen and was a Fohlenprämie the year of her birth. In 2010, St.Pr.A. Elfenfeuer completed an excellent Mare Performance Test in Vechta to obtain her title and was selected to compete at Rastede. St.Pr.A. Elfenfeuer was discovered at the 2010 Winter Mixed Sales in Vechta by her rider and owner Alice Tarjan and upon importation to the US has enjoyed a celebrated dressage career. In 2012, the mare secured the Reserve Championship title in the FEI 5-Year-Old Division at the USEF/Markel Young Horse Championships scoring an 8.0 for Canter, 8.5 for Submission and 8.2 for General Impression. She hails from the successful Elfi dam line that has been invited to Rastede time and again. Her dam St.Pr.St. Elfensonne has produced 9 Premium foals, 4 States Premium daughters and the stallion Dimanche Royal by De Niro who was licensed in 2012. St.Pr.A. Elfenfeuer returns to defend her Championship status with rider and owned Alice Tarjan.

The 2007 German bred Oldenburg gelding Don Fredo HD (Don Frederico x Kordula (Pik Bube – Waidmannsheil)) was bred by Ferdinand Sanladerer and was a Fohlenprämie the year of his birth. Don Fredo HD is yet another Oldenburg Auction graduate and was discovered at the 2011 Oldenburg Spring Elite Auction. His dam Kordula comes from five-generations of States Premium mares from the dam line of Kabinda. Kordula has also produced the Advanced dressage horse Rubina by Rubirando and the M Level dressage horses Pandora, Radcliffe and Joy of Jazz. Don Fredo HD is owned by Mesa Farms LLC and is ridden by Heidi Degele.

The 2007 German bred Oldenburg gelding Lysias (Licotus x Rabea (Royal Diamond – Tin Rocco)) was bred by Steffi Becker and was a Fohlenprämie the year of his birth. Grand-dam Rebecca is a full sister to the licensed Grand Prix dressage stallion Torero by Tin Rocco from the Reinwona dam line. Lysias is owned and ridden by Stacey Hastings.

In the Developing Prix St. Georges Championship again 5 of the 11 horses selected for the finals are German Oldenburg’s! The 2004 German bred Oldenburg gelding Fortune and Fame (Florencio I x Vb.Pr./El. Rinette (Bonjour – Waldloewe)) was bred by Doerte Gramberg and was a Fohlenprämie the year of his birth. Dam Vb.Pr./El. Rinette also produced two States Premium daughters and the Advanced dressage horse and licensed stallion Fellini by Feiner Stern, who was the Reserve Champion of his Stallion Performance Test at Prussendorf in 2001, finishing with an impressive overall index of 133.93. Grand-dam St.Pr./El. Rieke produced the licensed stallion Prinz Royal by Prinz Miro who placed third at Rastede as a three-year-old stallion. Fortune and Fame is owned by Melody Jackson and is ridden by Karen Lipp.

The 2005 German bred Oldenburg mare Somerhall (Sir Donnerhall I x Arantscha B (Archipel – Karon)) was bred by Theo Berkemeier and was a Fohlenprämie the year of her birth. Dam Arantscha B competed to L Level in dressage before breeding and excitingly Somerhall’s younger full brother Sunshine 504 is also a successful Advanced dressage horse in Germany. Grand-Dam Koralle by Karon has produced three States Premium daughters. Somerhall is ridden and owned by Ashley Wimmer.

In the Developing Grand Prix Division the 2003 licensed German bred Oldenburg stallion Sandomere (Sandro Hit x Elite-St. Romina (Ramiro’s Match – Modus xx)) was bred by Marion Menck and was a Fohlenprämie the year of his birth. Sandromere completed his 70-Day test at Münster-Handorf in 2006 scoring a 125.21 index in dressage. He is a full brother to the licensed Oldenburg stallion Sandro’s Match and a full brother to the Advanced dressage gelding Summer Hit S. Sandromere is owned by Holly Reimers and is ridden by Merri Velden.
Dressage For The Future

Not surprisingly when we look at the statistics of this Championship the best young dressage horses in the country come from the leading non-profit breeding societies in the world. The German Oldenburg Verband is represented by 18 horses, the KPWN is represented by 16 horses and the Hanoverian Verband is represented by 12 horses. After this there is a sharp decline with 2 German Westphalians, 1 Danish Warmblood, 1 Hungarian Warmblood, 1 Fresian, 1 American Warmblood and 2 unregistered crosses. You will also notice the complete lack of horses from some of North America’s popular private registries. 14 of the above listed German Oldenburg’s were awarded as Fohlenprämie’s in the year of their birth when their quality as foals was identified by our German Oldenburg Inspection committee’s. The horses are the proof that success is built upon generations of tested sires and proven dams that are held to a true international standard.
Pictured L-R: Qredit Hilltop, St.Pr.A. Elfenfeuer, Fashion Designer OLD