Heidi Degele has sold over 20 horses since the beginning of the 2014 winter show season and has been referred to lately by many as the “Go To Girl” in Wellington for sales of top quality dressage horses. With her own farm located just five minutes from Wellington in Loxahatchee, Florida, Degele works hard to get to know what a client needs to match them with the right horse. Her reputation as a sales master combined with her skills as a dressage trainer with a top show record make her an unbeatable combination. 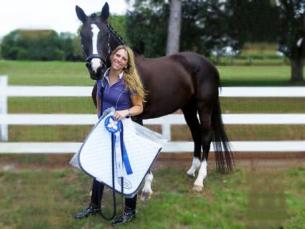 Rococo OSH and Heidi Degele received Reserve High Score with a 75.3 percent at the Gold Coast in May 2014 (Photo: Al Guden)

Degele really gets to know what the prospective buyer or client needs. She takes the time to make sure that the rider will make a good match with a horse she has. She’s even matched a prospective buyer to a horse in her stable from a sales video.

“The client was so happy with the horse she called me again for another horse, but I knew I didn’t have the right horse for her,” she said. “I had five or six other sales horses, just not the one that would match what she needed.” She continued, “It’s just not who I am to match a prospective client with a horse I know will not work for them. It’s important to me that they go away happy, the client and the horse.”

Degele has triumphed in the mastery of training and competing young horses up the levels through the FEI young horse tests, as well as through the USEF Young Horse Championships Grand Prix test. She trains horses with classical and systematic methods she cultivated from years of full-time training with top American coaches and she truly mastered her system while in Germany training with Hubertus Schmidt from 2004-2007, but also contributes her system to Patrick Burssens and Lars Petersen. 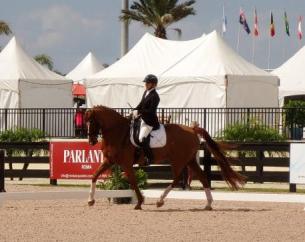 Degele shared her training philosophy, “Make it fun for the horse. That’s the key to success. I train and touch on what’s difficult for each individual horse so that the horse can improve and get stronger, but I don’t want to drill so much that they resent the work. It’s important that is it fun for the horse and that you always finish on a good positive note when training.” She continued, “I’ve sold horses all over, from Peru to Canada to Washington State to Maryland, Colorado, Texas and so on. Many of them stay here in Wellington and go to top barns, for instance Oded Shimino’s new Facility”.

Creating good show records for sales horses is another skill in which Degele excels. She is able to help create confidence in horses with little or no show experience. “I’m proud of the sales horses that have come needing a show record,” she said. “With such great horses, it’s been fun to work with them at the shows.”

One success story is Rococo OSH, a horse who had never competed before. Under Degele’s guidance the mare won her very first horse show with a 75.35 percent and received Reserve High Point. Immediately after the competition, Degele found a buyer for the horse. Win a Gen, aka Whinny, sponsored by Lisa Wallace and DBS Boots, also had not shown in the US. With Degele’s help the gelding had an almost flawless test in the Prix St. George and scored over a 70 percent at White Fences Equestrian Center. Degele shared, “I took him to three tests and each time he got better and better. The last time I showed him, he scored a 70 percent and since has been sold.”

And with Unique, she scored 71.71 percent in winning 3rd Level, 68.378 percent and winning 4th level and 70.658 percent in Prix St George at the Adequan Global Dressage Festival this past winter season. This gelding was also sold soon after showing.

“It’s been great to be a part of several sales horses with great scores,” she said. “All these horses sold within the weeks after they competed at a show.” 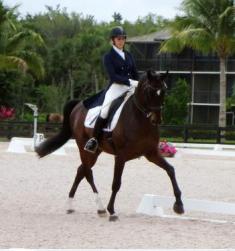 “It’s extremely important to me when I get a phone call or email from people who’ve bought horses, even if that’s a year, two years or even three years after. I love it when they tell me how much they love their horses. That’s so rewarding for me.”

“I’m excited to announce that I’m working with a new partner and will be able to bring horses directly over from Europe,” Degele shared. “It’s important to have a good group of horses from clients in the USA, but also a continuous good group of up-and-coming horses from Europe to fit the demand of the US Market.”

Degele, also an accomplished FEI trainer, works with students including Cara Broderick, who rides Duvall in her fourth year training with Degele. She has flown her horse from England each year for the past four years for the Wellington Dressage Winter Season. Under Degele’s tutelage, she continues to train and grow, and the pair received a 65.263 percent in 3rd Level in 2014.

Student, Joanne Brooks, travels to Florida from Canada working hard all winter season with Degele. During their third year together, Joanne rode Lyric to receive a 68.289 percent in 4th level during her very first dressage show this past winter season. Student, Linda Signorelli, bought a new horse from Europe, Fergie. She works with Degele year round.

Degele is planning to showcase her own 9-year-old horse, Lakota HD, in the (Young Horse Grand Prix) called the Developing Grand Prix during the 2015 winter season to qualify for the National Young Horse Grand Prix at the Festival of Champions. Training together since Lakota was 3 years old; Degele has worked with Lars Petersen, but is now currently working with Patrick Burssens. With a beautiful piaffe and passage, they look forward to the upcoming winter season and putting the final finishing touches on all the pieces of the puzzle for a successful future at the Grand Prix level. Proud of her top horse, Degele said Lakota doesn’t want to go back to the barn after work outs, he’d rather go on a trail ride or around the farm. “He really loves life and loves to compete!” she added. 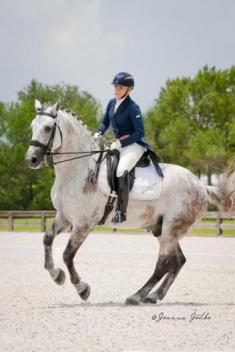 Also, Degele has a horse named Lionwood Kinsale’s Lad, a 9-year-old approved Irish Draught Stallion, owned by Ken Haley, that she competes in the Intermediate I level. Degele spent the summer preparing an Irish freestyle for that level. Degele competed Lionwood Kinsale’s Lad to his best scores in August at the Gold Coast Dressage Association (GCDA) held at the Palm Palm Beach Equine Clinic in Wellington, Florida. They scored 71.13 percent and 69.25 percent in the Intermediare 1 freestyle, winning the class to Irish/gothic music.

Degele accepts horses for full training for competition and consignment. She always has super horses for any prospective buyer. Degele’s philosophy, time, and energy make her one of the top professionals in the dressage industry.

She is considered by many as the “go to” person in Wellington for buying and selling top dressage horses.  Visit her brand new website www.HeidiDressage.com